Have You Tried the New Pensacola Ferry System Yet?

The new Pensacola ferry system is making traveling between Downtown and the beach that much easier! For our Pensacola residents, say goodbye to beach traffic! Instead, say hello to the new and easy to use ferry system. The two boats – named Turtle Runner and Pelican Perch – are currently operating Monday – Sunday in the peak season, with departure times beginning as early as 8:30 AM! 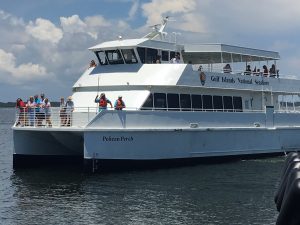 The ferry has three different landing locations, depending on where you are or want to go. For those who are downtown and want to go to the beach, head to Palafox Pier. Here, Turtle Runner and Pelican Perch will both start and finish their daily route. This is a premier location in Pensacola, situated at the end of Palafox Street. Departure times vary between 8:30 AM and 5:30 PM. Thursday, Friday, and Saturday departure times are also offered at 6 and 8 PM.

Meanwhile, if you’re already on Pensacola Beach and you’d like to head downtown without the traffic, simply take one of two pickup points on the beach. The pickup point at Quietwater Beach is within proximity to many popular shops and restaurants – from fine dining at Hemingway’s to a casual atmosphere at Cactus Flower Cafe, there’s something for everyone! Departure times from this location begin at 10 AM and last till 4:30 PM with destinations varying between Downtown Pensacola and Fort Pickens. Additional Thursday, Friday, and Saturday departure times for downtown are offered at 7 and 9 PM.

After you’ve spent a day exploring Fort Pickens, take the ferry back to Pensacola Beach or the downtown area. Camp, hike and explore this historic military fort. Then, catch the ferry – the last boat leaves at 6:30 PM, so don’t be late!

While ticket prices vary, we love that you pay one time and ride all day! Each ferry holds up to 149 passengers and has a climate-controlled enclosed main deck, observation deck, food and beverage station, and more! National Park Service rangers and Gulf Coast Maritime Services provide passengers with history and landscape narratives.